Time by time you can see significant change in the architecture concept around the world. Some of them seems to be very strange in outlook, may built for to thrive in different weather conditions, targeting some business goals..etc. Here list of some of most strangest buildings around the world.

The basketball building is The head office of longaberger basketball company in Ohio, United States. This building is exact copy of company’s own basket, found as a strange way of promotion. It took two years for the completion of this 1,80000 square foot company building.

Basket building is the true example of mimetic architecture, in which buildings are constructed in exact shape of products for promotion. The inner part of basket building is decorated by glass ceiling, walls also becomes attractive through the paintings of founders of the building. Both employees and guests can enjoy the natural daylight inside the building.

9. The Church of Hallgrimur, Iceland

The hallgrimur church is the tallest and unusual church in Iceland,can located in capital city of Reykjavik. Nordic design was the construction base of this church, most spectacular work of architect Guojon samuelton. It took more than 38 years for the completion of this sacred building, started in 1945.

The 50 foot tall organ inside the church also make interior more attractive. The bell tower of the church gives entire view of the city. There also can see statue of Leif Erikson in front of the church, first European to landed in North America.

The Guggenheim museum can be spotted in city o Bilbao in Spain. It was designed by Canadian-American architect Frank Gehry and opened for public in the year 1997. Actually Guggenheim museum is a complex of several number of interconnected buildings.

The entire building is coated with titanium, limestone and glass. This museum is situated along side of Nervion river, makes impressive view to this building. This museum contains the specific works of contemporary artists. The collection of European and American paintings also makes this museum to one of finest places to visit in Spain. 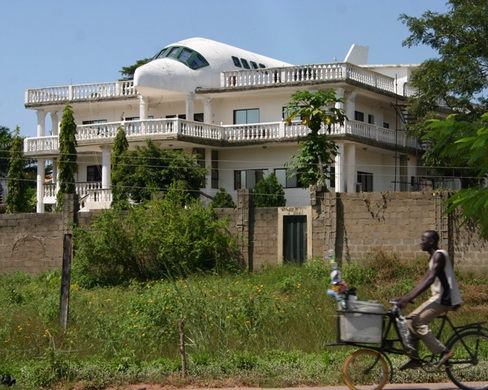 Liza Said, a Lebanese immigrant to Nigeria had always loved traveling. She and her husband, a contractor named Jammal, married in the 1980s and were living in Nigeria. Willing to promise the world for her love, Jammal agreed to one day build a plane-shaped home for her as a symbol of their love and her love of travel. For years, the promise remained unfulfilled, until the in the early 1999, the Said family found the perfect location for their dream home.

Construction began in 2002, with Jammal overseeing every step of the process. Wanting to make everything perfect for his wife, Jammal began work on a 100-foot long plane with a wingspan of 50 feet extending over the sides of the hilltop villa. Spanning the entire roof, the body of the plane features a kitchen and a computer room inside the cockpit that looks out over Abuja.

Along with the main villa, the property features a number of other aircraft-styled structures. Behind the main house is a smaller, plane-topped guest house and a two-story security booth created to resemble an aircraft control tower.

The strange call shaped Atomium building is situated in Brussels, capital city of Belgium. The 102 meters high Atomium was designed by Andre Waterkeyn, have shape of unit cell of Iron. The entire building was designed through stainless steel, by7 joining columns with clad spheres.

Each spheres have diameter length of 28 meters, tubes have length of 2298 meter. There are escalators installed inside these tubes for the visitors. The top of building have all needed facilities like restaurant and viewpoints.

La Pedrera building situated in the city of Barcelona in Spain. It took 6 years for the completion of this strange building starting in 1906. The Catalan architect Atoni Gaudi was the designer of this building, listed on UNESCO’s world heritage site.

The cave like balconies itself makes La Pedrera a strange looking building, have limestone facade. The roofs of this building decorated with pictures and postcards of Barcelona. The interior of the building also designed for bringing daylight, will also get stunning view of city from the top.

The flower like shaped lotus temple can be spotted in New Delhi, capital of India. Lotus temple is considered as the mother temple of Indian sub continent, can visited by peoples from all religion. Inspired from lotus flower Architecture Fariborz Sahba was designed this beautiful building of India, opened in the year 1986.

The free standing petals is the main attraction of this temple, prefabricated by rock.The entire temple was made through Marble, dolomite and cement. The central hall of lotus temple capable of holding 2500 people at a time, have huge 9 doors. The ponds beside the temple makes a feeling like temple is floating just like that of lotus flower.

The stone house can located in Fate mountains of Portugal. It was built in 1974 by the inspiration of flintstone cartoon. It was built from two huge rocks, linked by concrete mixture. It makes feeling of prehistoric structure and also becomes one of finest tourist attractions in Portugal.

The crooked house is actually a strange looking part of shopping complex in Sopot of Poland. It was designed by Szotynscy and Zalesky in 2004, inspired by the styles telling in fairy tales. It is also became one of the most photographed sites in Poland.

At first looking visitors have feeling of building is about to melting in next moment, makes totally strange from beside buildings. It also have glass doors and blue and green enameled shingles which illuminates at night.

The mind house is situated in hill of el carmel of Barcelona city, in Spain. It took 14 years for the completion of this strange looking building, starting from the year 1900. It is also listed on world heritage sites, designed early part of 20th century.

The complex actually contains 60 different houses, chapels and a park, have stunning fountain at center spot. The stunning statues at different corners of mind house also makes this site more attractive. It also became one of tourist attractions in Spain that get most tourist attendance.

Pregnancy will humble you; see before and after photos of a lady who got pregnant